The villa was designed by the renowned Mauritian architect, Jean Marc Eynaud. Stretching out across 400 square metres, inside the villa is all chic, earthy tones, plush wooden floors and grand, wooden beamed ceilings, while high glass doors slide open on to panoramic views of the quiet surrounding coves, and out across the ocean to Praslin and La Digue islands.

The interiors are a striking blend of traditional and contemporary, with aesthetic notes throughout that channel the surroundings and handpicked objets d’art and soft furnishings bringing a real sense of personality and individual style to every corner of the place. 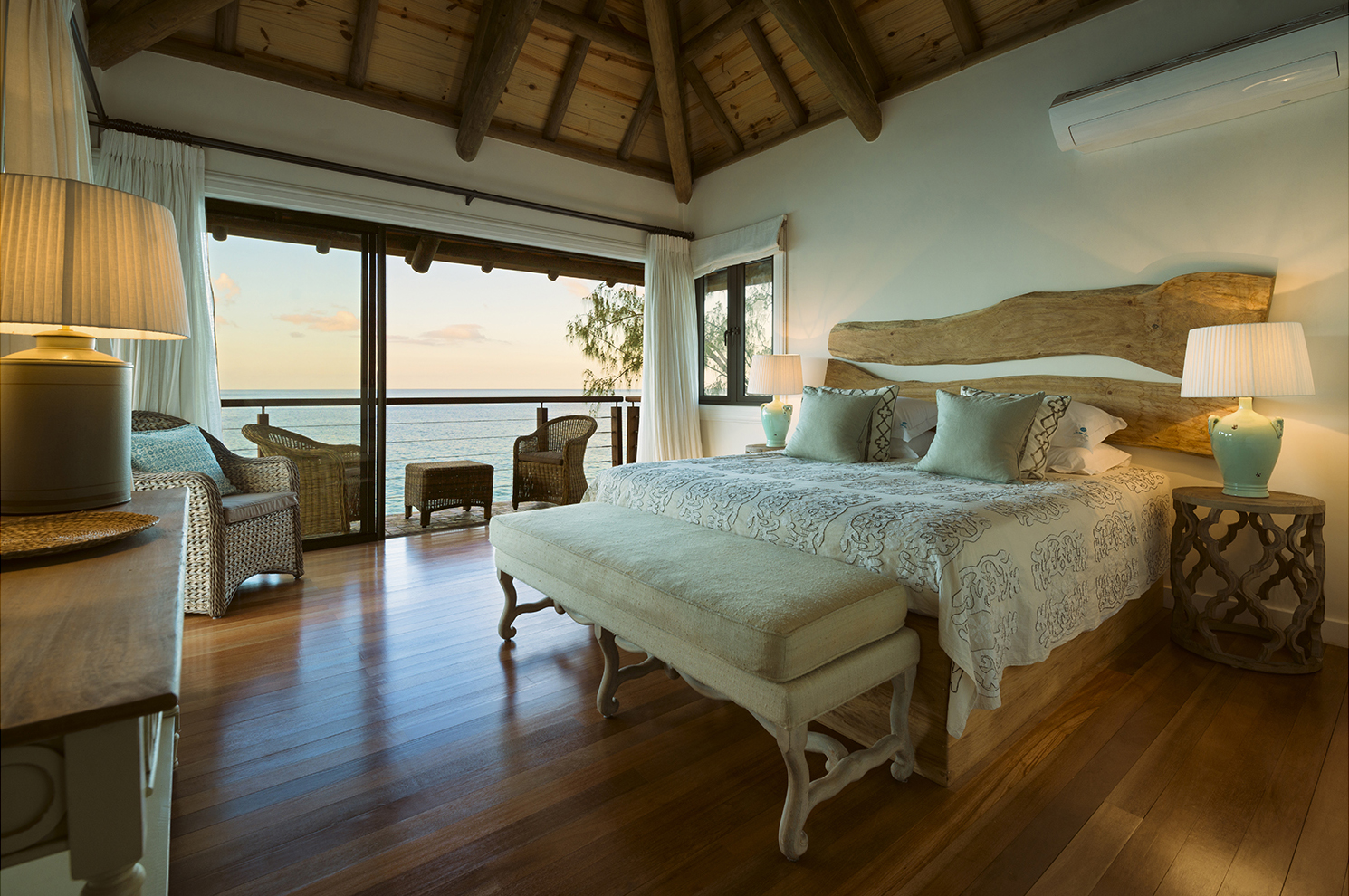 There are four rooms in total, with the villa sleeping up to eight people. All the rooms come with double beds adorned with high thread count Egyptian cotton sheets, air-conditioning, high-speed WiFi, private balconies and jaw-dropping floor to ceiling views over the waves lapping on the sculptured rocks to wake up to in the morning.

If all that wasn’t quite indulgent enough, ensuite bathrooms are decked out with soft Italian cotton towels, top of the range, luxury bathroom products and sea views.

Style-wise, each is individually decorated with carefully handpicked lamps, side tables, mirrors, cushions, throws and headboards made of beautiful, local Takamaka wood.

Each room is slightly different from the last: no room overlooks another, even though they all have balconies; two rooms have high wood-beamed ceilings, while another can be fitted out with two single beds; another even comes with its own additional outdoor shower. 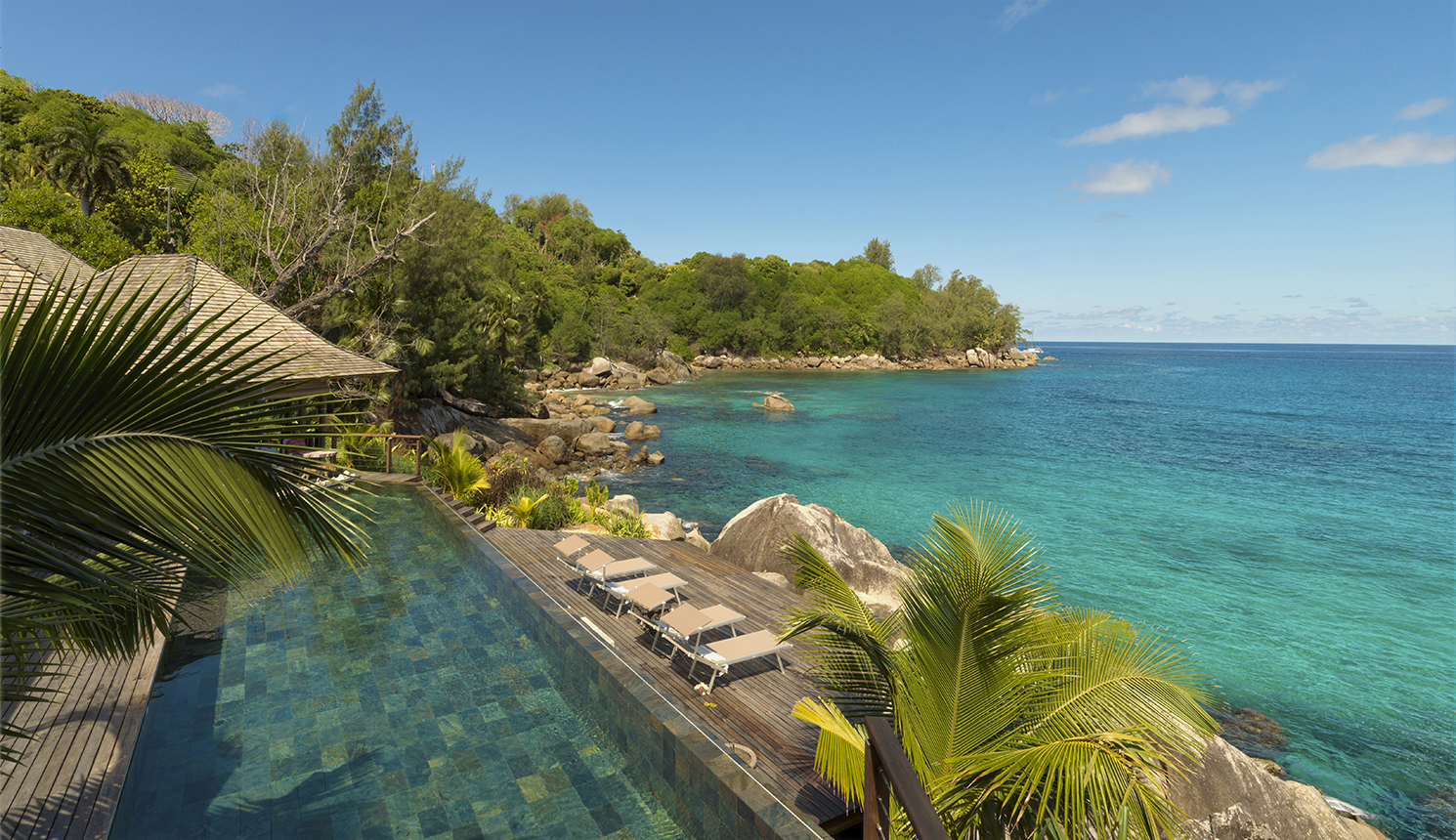 Situated less than a five minute walk from the beach, Sea Monkey looks out over all it surveys from the tip of a small, rocky peninsula. The unobstructed 180-degree views take in two distant islands, a pair of bays situated on either side of the villa, a front landscape of ancient granite boulders descending to the azure waters and a small, secluded cove a short swim away.

In front of the villa and framing the view of the sea is Sea Monkey’s dramatic centrepiece and focal point: a 60 square metre infinity pool. Surrounded by loungers and giving onto multiple levels of wooden decking, it’s one of those rare places where time can stand still as you lie back and listen to the waves lapping on the rocks.

The villa is surrounded by 1600 square metres of lush, well-maintained tropical gardens. The perimeters are fringed with attractive floral margins and, in places, by fruit-bearing tropical trees such as avocado, bananas, chillies, patole, paw paw, red coconuts, citronelle and lime – all of which of course, make their way to the dining table.

From the gardens there’s direct access down to the sea via a gentle flight of steps, where you can swim, go kayaking or snorkelling, or even lazily cast a line out to try to catch a fish or two. If even that sounds too much like hard work, you can just sit and watch the fishermen hauling in the catch of the day on their colourful boats or our resident dolphin pod playing in the waves.

In terms of parking at Sea Monkey, there’s space in the drive for up to four cars. 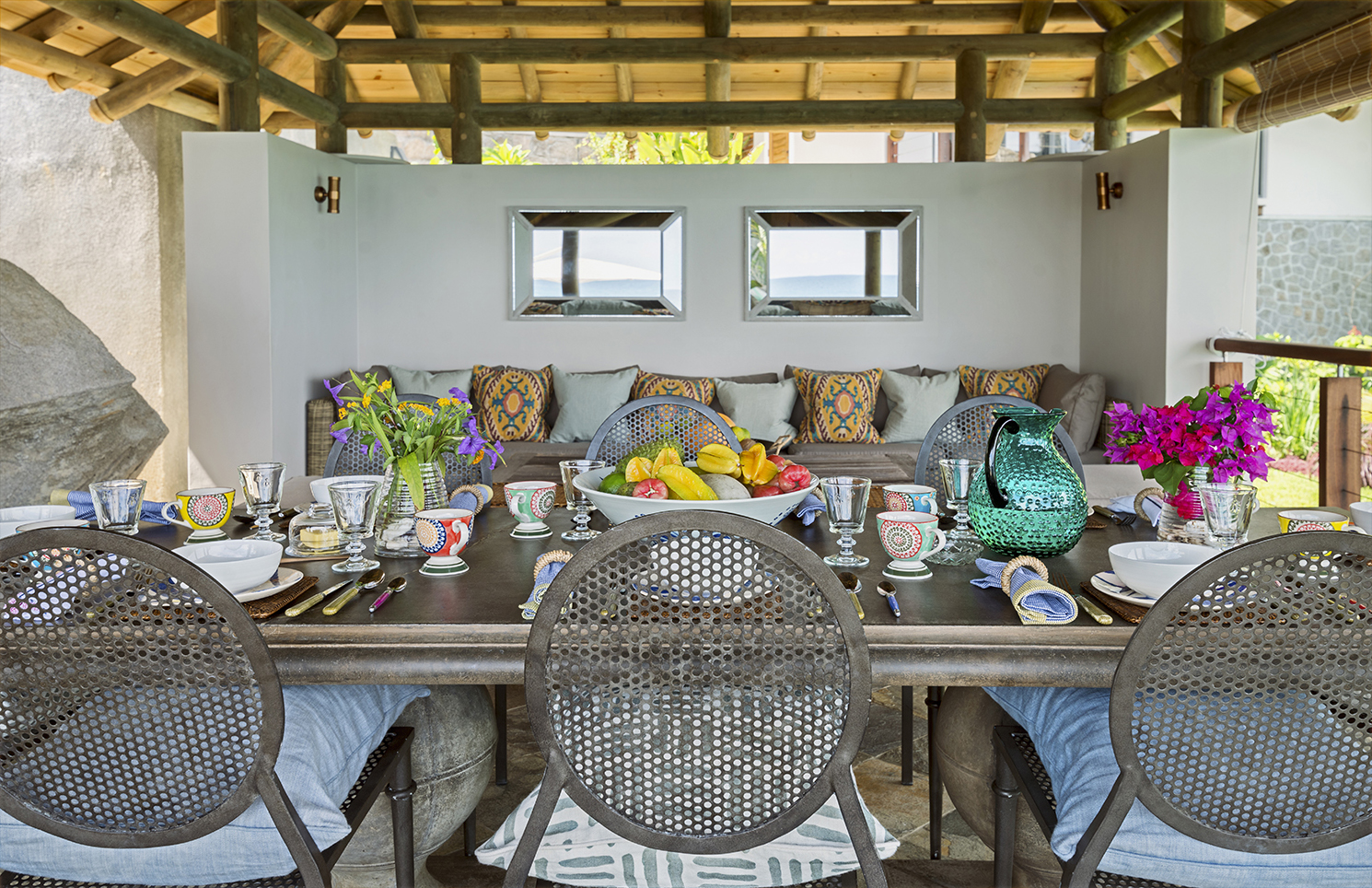 The spacious and well-equipped indoor kitchen, and an in-house chef to whip up anything you should fancy, ensures that all your culinary requirements are catered for in style.

But with a location like Sea Monkey’s combining with the gorgeous year-round Seychelles weather, it would be a shame to spend any more time indoors than is strictly necessary.

To complete our cooking and dining offering there’s a gazebo with a lounge, bar, barbecue and a dining area accessed by a walkway carved through dramatic granite outcrops straight from the Jurassic era. 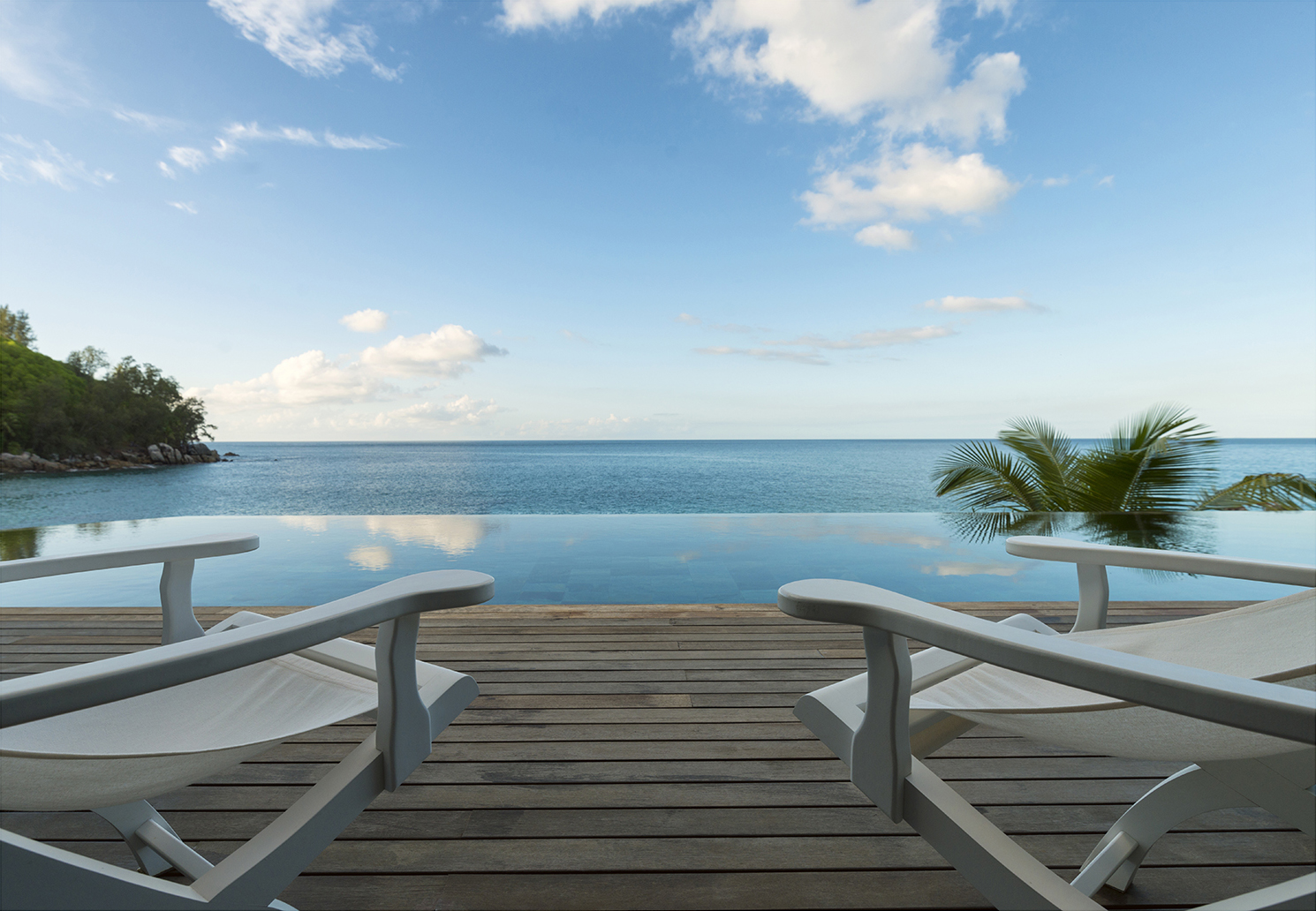 The villa is fully-staffed by a manageress, two house boys, laundry person and in-house chef who between them can cater to your every need. 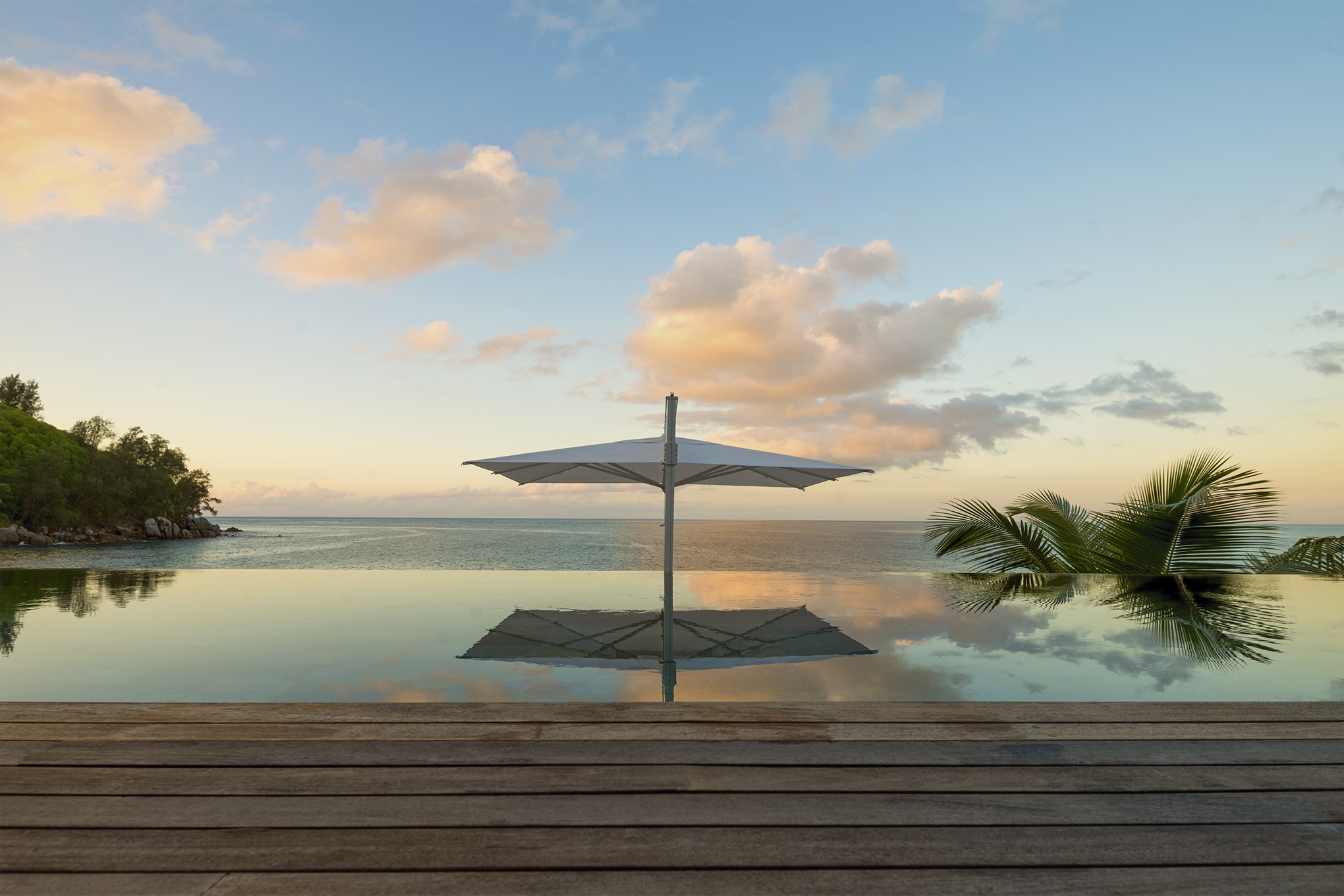 Sea Monkey’s range of amenities extends from fishing rods for casting off the rocks and snorkelling equipment, to kayaks, paddling boards and, back on dry land, a table tennis table. We’re also delighted to organise car rentals, fishing and diving trips and other excursions, and can also arrange for in-house yoga sessions and spa treatments on request. 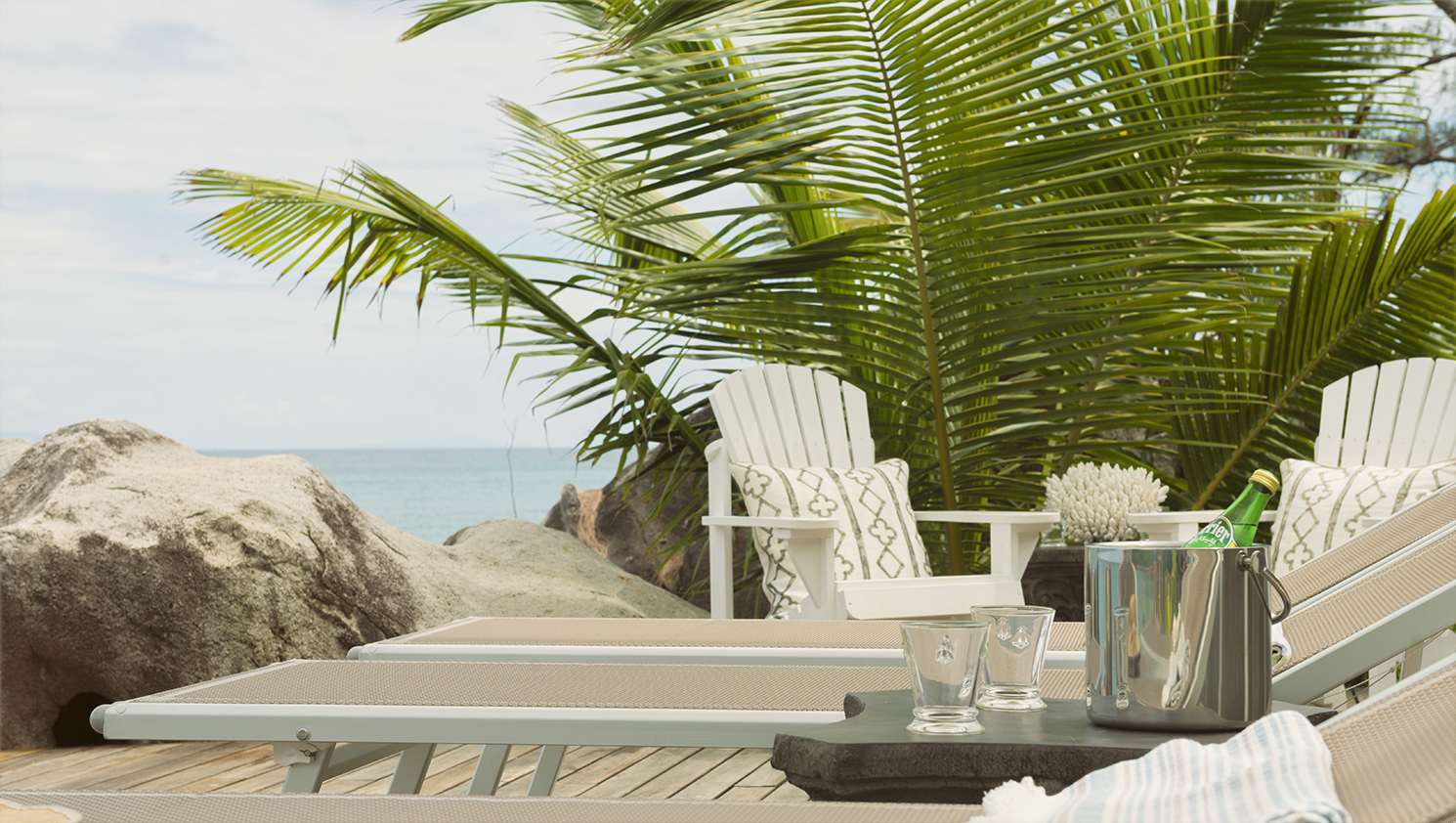 Sea Monkey isn’t simply about what’s held within its four walls, or the facilities and services offered, though.

Each and every day is broken up into a series of unforgettable moments: the sound of the waves breaking on the rocky headland in the morning; lying in bed and listening to the warm evening breeze rustling through the trees; sitting out on the deck at night watching the reflection of the stars and the moon twinkling on the inky black ocean.

And that’s what makes Sea Monkey truly unique: the sense with which the villa is completely at one with its natural surroundings and how they flow throughout the place.